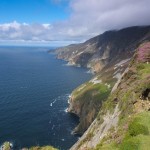 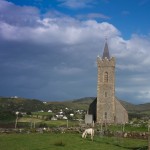 Donegal is the north west outpost of Ireland. Separated from the rest of the republic by the slimmest Northern Ireland Border and wrapped in an extensive Atlantic coastline. The county carries this sense of independence in its physical geography, its people and the stark beauty of the land. The area has survived the rigours of the Atlantic, poor quality farmland, immigration, isolation and is moving into the 21st century in its own right, as a place of tradition and culture, unsullied by mass tourism.

The walking route starts from Donegal town on The Bluestack Way formed in 1999 is 47km long to Ardara. 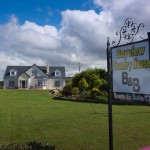 The route crosses the Bluestack Mountains, with peaks of 600m but the Way rarely climbs above 250m. It is an unspoilt area and a glimpse into a Donegal of the past. The Bluestacks are wild, rough and very beautiful with wonderful views of south Donegal and they really do look blue!

Bealach na Gaeltachta (The Ways of the Gaeltacht), were set up in 2000 as a set of long distance routes covering most of North-west Donegal. You will follow Slí Cholmcille in the south west corner of the county to Kilcar. You will see the wonderful indented coastlines, blanket bogland, and innumerable streams, rivers and lakes, glens and moors. 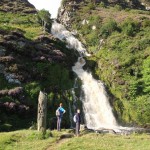 Donegal County is the fourth largest in the country and has a temperate climate. The county was shaped by glaciation – granite rocks provide good footing. In the lower country limestone hills provide good drainage and a drumlin studded landscape. The Ways are very well marked with clear signposting along the route. Approximately 30% of this route is on tarred roads.

The 8 day tour consists of 6 full days walking. The tour starts in in Donegal Town and follows the Bluestack Way via Glenties to Ardara. You then follow Sli Columkille in the southwest corner of Donegal to Kilcar where the walking tour finishes. The 10 day tour has a free day in Glencolumkille and a days hike along Slieve League cliffs at Bunglass, the highest sea cliffs in Europe.

* Spend an extra night in Ardara to walk the sand dunes of Portnoo and Nairn and beautiful Dawros Head.
* Include an extra night at the end of your tour to visit the ancient settlement on Boa Island in the Lakes of Fermanagh in Northern Ireland. Overnight in Enniskillen.

Donegal Town is 3.5 hours by public transport from Shannon or Dublin Airports. It is not advised to use Donegal airport as it is much further in the northwest of the county and is not connected to Donegal town by regular public transport.