The Dingle Way is a circular route of 179km (112 miles) circumnavigating the Dingle Peninsula west of Tralee in County Kerry, Ireland. It is one of the first national walking routes (Waymarked Ways) and follows minor roads, traditional access routes to turf cutting areas and forest paths. The only high ascent is 600m, crossing the shoulder of Brandon Mountain between Ballydavid and Cloghane. This route is well marked and achievable by all walkers.

Prepare for the vivid colours of purple loosestrife, scarlet fuchsia and orange montbretia. Drop in some wild yellow ragwort, the coconut honeyed scent of gorse and the shades of purple heather and you have a walking destination created by the Divine.

The Dingle Way walking route skirts the mountains of the Slieve Mish range, which form the spine of this 65km long peninsula, jutting into the Atlantic Ocean. The mountains are rounded, not as high as their nearest neighbours on the Iveragh peninsula and formed from a beautiful old red sandstone, that is always visible in the area. Glaciation in the last Ice Age left coums and valleys, the natural harbours of Dingle and Ventry and a gentleness that will not fail to impress a visitor. The western end is nothing short of breath taking – the Blasket Islands rear from the Atlantic calling to the sheltered haven of Dunquin (Dun Chaoin), before the mountains rise to the impressive bulk of Brandon, St. Brendan’s Mountain and downwards through Caherconree, Baurtregaum to the Maine Valley. 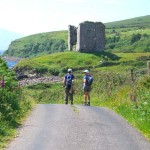 The peninsula is littered with remains from the early Christian period, oratories, beehive huts, megalithic tombstones, monastic enclosures, high crosses, to name a few. It is a spiritual awakening. Beautiful white sandy beaches, a temperate Gulf Stream climate and the profusion of strong colours in the flora – montbretia, fuchsia, purple loosestrife to name a few – make the Dingle Peninsula a wonderful location.

The town of Dingle (An Daingean) retains its essential character attributed to a working fishing harbour. The steep streets have been reinvented with colourful tourist shops, craft outlets and a host of restaurants and pubs. There are still many local niches to enjoy the town behind the scenes. It is also the centre of one of Ireland’s most popular Gaeltacht regions, where 43% of households are predominantly Gaelic speakers, which adds a wonderful flavour to the local supermarkets!

Otherwise small farming villages populate the peninsula – tourism and farming are the two main industries. You will see sheep aplenty, some beef cattle and the occasional small dairy herds. The noticeable construction of new dwelling houses indicates a return to the area of many who left in the 1980’s for economic reasons.

Overnight stops (apart from Dingle) are in villages, allowing an opportunity to experience life with the locals and a chance to try Guinness and Gaelic! Early Christian sites, standing stones, burial mounds etc. will be all along the route – many are nameless clumps of stones and any of significance will be referred to in your route notes.

To squeeze the best into our itineraries, we don’t include the Tralee to Camp section. The full length of the Dingle Way starting and finishing in Camp is 153km. Approximately 27% of the route in on minor tarred roads. We can include the first section for anyone who wishes to walk the full route. 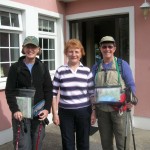 The 8 day tour consists of 6 full days walking, starting and finishing in Camp village. Contrary to occasional opinion, Camp (the starting point for our tours), is not a collection of canvas shelters! The English name translates from the Gaelic “An Com”, the hollow, and refers to its topographical position. The tour crossesthe Slieve Mish mountains to Annascaul and Dingle. West of Dingle there are 2 days of spectacular scenery at the western end of the peninsula before retruning eastwards via Mount Brandon and the northern shores of the peninsula to Camp.

The 8 day Short Stop is designed for those who wish to take their time, or walk with older or younger family members. Each walking day is shorter mileage allowing plenty of time for photos and coffee!

The 10 day tour follows the same route as the standard 8 day itinerary, with additional days on the northern section offering a chance to climb Mount Brandon (Ireland’s second highest peak) and additional walking in Castlegregory. 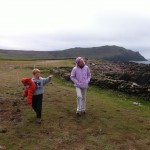 The 7 day tour starts in Annascaul village and follows the route all the way to Cloghane. Your host transfers you back to Dingle town to depart.

The 5 day tour is an abbreviated walking tour that starts and finishes in Dingle and includes the most spectacular parts of the Dingle Way walking route.