The Burren is a National Conservation Area; an amazing limestone escarpment, overlooking the Atlantic Ocean, the Aran Islands and Galway Bay. Burren is an English word from the gaelic “boireann”, a rocky place although the Burren is shaped more by water than by rock. Underground, there are thousands of streams and rivers and it exists because it is perfectly balanced, at the edge of the sea, at the end of the land, made of rock that was once eroded from above and is now being eroded from below.

The Waymarked Burren Way starts in Liscannor and our section finishes in Ballyvaughan. We have chosen certain sections of the route to allow for village locations for each overnight stay.

You will also have a chance to visit one of the Aran Islands on your free day in Doolin, which is also the home of Irish traditional music.

The limestone surface affords excellent drainage, so most tracks are dry or rocky paths. It is well signposted with brown Burren Way signposts and trail markers. 27% of this tour is on minor road surface.

The 7 day tour consists of 5 full days walking. The tour starts in Liscannor and follows the coast to the Cliffs of Moher and the village of Doolin, famous nationally and internationally for its traditional Irish music. A free day in Doolin includes the option to visit the Aran Islands. From Doolin the route ascends onto the Burren plateau before descending to Ballyvaughan on the southern shores of Galway Bay.

“This district is extremely rocky and exhibits a rude magnificence of a wild, barren and unreclaimable waste…..” The Traveller’s New Guide through Ireland, 1815. *

If you arrive to Dublin airport, use a rail connection to Limerick or Ennis. 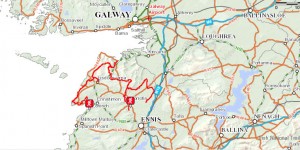 “The walking was heavenly, the hosts wonderful, and the pubs the greatest.”