The Western Way is a relatively short walking route of 101km (63 miles) from Oughterard in County Galway to Westport in County Mayo. This part of western Ireland contains Ireland’s finest scenery in unspoilt and quiet countryside. The route is part of the longer Western Way walking route that continues from Westport to Ballina, Co. Mayo.

Connemara – translates as “the Conmaicne Tribe of the Sea” – even the name is wildly inspired! Stretching from Galway Bay to Killary Harbour and bounded on the east by Lough Corrib & Lough Mask, the principal range of mountains is the Twelve Bens and the smaller Maumturks. 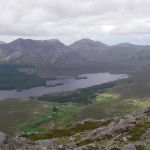 Grey quartzite peaks, shimmering over bogs and small loughs, fed by an average rainfall of 1700mm! It is a wild place, with some of the finest scenery Ireland has to offer.

Early settlements were mainly on the coast; the interior deemed too infertile and wet for any useful occupation. The area suffered huge population loss in the mid 19th century but through the guidance of the Irish Land Commission, land leases were offered to tenant farmers, fishing was structured and the area was slowly rejuvenated.

Today much of the valley land is now under forestry schemes and intensive fish farming fills the coastal loughs.. The predominance of hills and water means a relatively small road network but despite this, a strong native population remains.

The full Western Way runs from Oughterard in Co. Galway to Ballina in north Co. Mayo. Our itinerary covers the south and central section, known as the Connemara Way – although it is often distinguished in literature as Western Way (Galway) with the Western Way (Mayo) from Leenane through Westport to Ballina.

The total walk is 77km. Approximately 36% of the route is on minor roads. 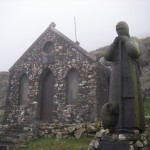 The 8 day tour consists of 6 full days walking. From Galway city, a bus transfer to Oughterard from where our route commences. The Way follows Lough Corrib  over bogland to the Pass of Mam Ean in the Maumturk Mountains, hauntingly beautiful and superbly uninhabited. The Way then descends to the beautiful Lough Inagh Valley and from there follows the shore of Killary Harbour, Ireland’s only fjord and a memorable sight to see. Entering Co. Mayo and the lower Sheefry Hills, crossing forest and bogland, it is wild and desolate on this section before passing under the towering bulk of Croagh Patrick, Ireland’s holy mountain. Finally the Way meanders to the island studded Clew Bay and the historic town of Westport. 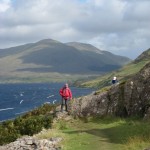 The 10 day tour adds 2 more days walking, starting in Oughterard, and includes a walk on the Killary Harbour Famine Road, a stunning green road constructed along the shore of Killary Harbour in the mid 19th century. A free day in Westport town offers an option to walk the Ballintubber Pilgrim Trail or just enjoy this lovely scenic town.

Shannon or Dublin Airports are the most convenient for this tour.

From Dublin, you can either take a train or CityLink bus to Galway city, or a regional flight.

From Shannon, a regional bus operates to Galway city every hour.